RAD Board of Directors

Appointed by Allegheny County Chief Executive Rich Fitzgerald. Term coincides with the term of office of the appointing authority and until its successor is appointed and qualified.

Ms. Kirk’s work in real estate development includes the acquisition, financing and economic/tax incentive financing for all forms of commercial real estate. She represents developers, owners and non-profit institutions on issues regarding real estate valuation, tax-exempt status, mineral rights and tax abatements for new construction and reconstructed properties. Her experience in real estate litigation extends throughout Pennsylvania where she often appears before administrative hearing boards as well as trial and appellate proceedings.

Ms. Kirk is an active member of the business and charitable communities. Nationally, she is a board member of Dress for Success. Locally, she is on the boards of the Riverlife Task Force and the Real Property Section of the Allegheny County Bar Association. A devoted supporter of women in the legal profession, Dusty is also a member of the Women in the Profession Committee of the Pennsylvania Bar Association. She has served on the boards of Planned Parenthood of Western Pennsylvania and the Juvenile Diabetes Research Foundation (JDRF).

Ms. Kirk earned her B.A. from Allegheny College and her J.D. from the Dickinson School of Law. She has two children and resides in Squirrel Hill.

Appointed by Allegheny County Chief Executive Rich Fitzgerald. Term coincides with the term of office of the appointing authority and until its successor is appointed and qualified.

Dan Griffin has been an active proponent of the Allegheny Regional Asset District since his appointment to the board in 1998. He has previously served as Board Chair and Vice-Chair several times.

He is currently the President of Griffin Consulting Services, specializing in business reorganization, non-profit development, and govenment relations. He previously worked in the health and fitness industry and was the General Manager of the Oxford Athletic Club from 2003 until its sale in 2017. Mr. Griffin was also the founder and president of the Downtown Athletic Club of Pittsburgh from 1995 until mid 2009. From 1981 through 1995, he was employed by Club One as a fitness instructor, was promoted to fitness director and finally to Vice President and General Manager (with ownership). During his tenure at Club One, Mr. Griffin was certified by the American College of Sports Medicine and by the Club Management Institute of IHRSA (held at the University of Michigan). Club One grew from a single-purpose racquetball facility into a 60,000 sq. foot, full service health and wellness center. He divested his interest in Club One and founded the Downtown Athletic Club of Pittsburgh, successfully operating it from 1995 until 2009.

Mr. Griffin was recognized by Junior Achievement of Western Pennsylvania as "business of the year," citing his dedication to the community and to its youth through his many volunteer and charitable activities. He was also recognized by City of Pittsburgh Mayor Tom Murphy for significant equipment donations to the Hill District YMCA. Mr. Griffin is an active participant in Pittsburgh and Allegheny County community issues. He was a member of Leadership Pittsburgh class XIII. He co-founded and was president of the Allegheny County Chamber Federation (Western PA Growth Alliance), a coalition of 25 regional chambers of commerce. He was a Finance Council member for St. Joseph’s O’Hara Township for 20+ years. Mr. Griffin was elected a board member of Visit Pittsburgh in March 2020.

Mr. Griffin, his wife, Marian, and their son, Sean, reside in O'Hara Township.

Appointed by City of Pittsburgh Mayor Ed Gainey. Term coincides with the term of office of the appointing authority and until its successor is appointed and qualified.

Ms. Fields is Executive Director of the Eden Hall Foundation. She is the first and only African American woman to direct a major private foundation in the Pittsburgh region. A veteran grantmaker and administrator, Ms. Fields manages the legal and financial business of the foundation. She began her grantmaking career at the Duquesne Light company, where she also managed the Employee Involvement Committee, United Way annual campaign and the company school partnership program. While at Duquesne Light, Ms. Fields was best known for having established a Pittsburgh chapter of the American Association of Blacks in Energy.

Ms. Fields is chair of the Education Committee of the World Affairs Council of Pittsburgh, under which she has overseen the development of an international relations summer program for high school students.  She is the former board Chair of the YWCA – USA based in Washington DC and a past director of Grantmakers of Western Pennsylvania, Seton Hill University, the YWCA of Greater Pittsburgh, the Carnegie Museum of Natural History, Children's Museum of Pittsburgh, Magee-Womens Research Institute and Foundation, the Pittsburgh Cultural Trust and The Ellis School. Ms. Fields is a trustee of the Jewish Women's Foundation and was a 2009 honoree of the YWCA Tribute to Women.

Ms. Fields received her bachelor's degree from Seton Hill College and a master's degree from Carnegie Mellon University. She and her husband, Fred, are lifelong residents of Pennsylvania and have two adult children.

Appointed by Allegheny County Executive Rich Fitzgerald. Term coincides with the term of office of the appointing authority and until its successor is appointed and qualified.

Jackie Dixon is currently a consultant. In her previous role as Director of Government Relations for Giant Eagle, Inc., she established and maintained positive relations with local, state, and federal government officials in the communities Giant Eagle serves throughout Pennsylvania, Ohio, West Virginia and Maryland. Ms. Dixon retired from Giant Eagle after 23 years of service to the company and the communities it serves.

Ms. Dixon is a board member of the Ladies Hospital Aid Society (LHAS). She is also member of the Carlow University Board of Trustees, and she received her master’s degree in Professional Leadership from Carlow.

Ms. Dixon is a member of the Fox Chapel Area Newcomers’ Club, and the University of Pittsburgh Community Research Advisory Board (CRAB). She is also actively involved in the Homewood-Squirrel Hill Redd Up-Clean Up Coalition (a consortium that regularly clears rubbish in Homewood), the Highmark Medical Review Committee, the League of Women Voters of Greater Pittsburgh, the Fox Chapel Area Branch of the American Association of University Women, the Fox Chapel Area Rotary Club, the World Affairs Council of Pittsburgh, the National Council of Jewish Women (NCJW)-Pittsburgh Section, and the BNY Mellon Community Advisory Committee. She is also a member of the advisory board of the Bartko Foundation, a private non-profit organization whose mission is to invest in the self-sufficiency of single minority mothers. She is a board member of Heritage Community Initiatives in Braddock which works to empower people and transform lives in the Braddock community. She is also a member of the Child Watch Board of Pittsburgh, an advisory group for Allies for Children.

Ms. Dixon was selected as one of 25 of the 2012 Women in Business Awardees by the Pittsburgh Business Times. She has been recognized as one of the New Pittsburgh Courier’s Fifty Women of Influence and also one of Twenty-Five Corporate Women of influence. Ms. Dixon has received the YWCA's A Tribute to Women Leadership Award in Business and Industry, and also the Every Child Inc., First Annual Community Service Award.

At-large member of the Board, nominated by Landforce Pittsburgh; term expires in June of 2022. The at-large member is elected by the appointed members from a list of nominations secured from development organizations. The person selected from the nominees serves for a two-year term and may be re-elected, if re-nominated.

Daniel Rosen is a Professor of Social Work at the University of Pittsburgh where he teaches classes on community health, social urban problems, and program evaluation. He is the Director of the Integrated Healthcare Certificate, coordinates the joint MSW/MBA program, and is the chair of the Health Research Advisory Panel at the Center on Race and Social Problems. Dr. Rosen served on the International Consortium for Health Outcomes Measurement committee to develop an internationally standardized set of outcome measures for people with disorders due to substance use or addictive behaviors. He has completed a mentored National Institute of Drug Abuse (NIDA) Patient-Oriented Research Career Development (K-08) Award focused on addressing co-occurring late-life mood disorders in older adult substance abusing populations. In addition to the NIH, he has received funding for his work from the CDC, SAMHSA, HRSA, and national and local foundations.

Dr. Rosen’s research focus is on identifying, defining, and elucidating the programmatic implications of structural and interpersonal barriers that impede individuals from obtaining needed mental and physical health related services. His research moves beyond “barrier identification” to collaborate with community-based providers in the design and implementation of innovative services for individuals with vulnerabilities. He is also the Founder of Wellbridge Health (www.wellbridgehealth.com), a connected health management company that offers a high-tech, high-touch model of care that significantly lowers healthcare spend by reducing avoidable hospitalizations and by focusing on patient education and self-management. He is the past Board Chair for both AgeWell Pittsburgh and the Friendship Circle and currently serves as the Vice-Chair for the Jewish Healthcare Foundation and is a Board Member of the Allegheny Regional Asset District. He and his wife, Shani, live in Pittsburgh where they raised their three daughters.

Appointed by Allegheny County Executive Rich Fitzgerald. Term coincides with the term of office of the appointing authority and until its successor is appointed and qualified.

Anthony Ross is founder and President of Ross Development Company.  Mr. Ross graduated from the University of Pennsylvania in 1978  and received his law degree from Duquesne University in 1981.  He resides in Pittsburgh with his wife, Karen, and has three adult children.

Appointed by City of Pittsburgh Mayor Ed Gainey. Term coincides with the term of office of the appointing authority and until its successor is appointed and qualified.

Dr. Kendra Janelle Ross is the Head of Social Impact at Duolingo, where she leads the community engagement and global philanthropic strategy. Before joining Duolingo, she served as an Assistant Professor of Sports, Arts, and Entertainment Management at Point Park University, where she also completed a Ph.D. in Community Engagement. Her dissertation research focused on Black women artists and cultural workers in the Hill District, where she serves as the co-chair of #ArtsInHD, a collective of Hill District creatives. Passionate about building a more equitable arts ecosystem in the region, Dr. Ross has served as co-chair of Pittsburgh Symphony Orchestra's Community Advisory Council. She currently serves as interim chair of the Unisound Steering Committee, supporting out-of-school youth music programming. In addition, she is one of the architects of Unisound's Black Teaching Artist-In-Residence program through her firm, ACT3 Consulting Partners. ACT3 has advised arts organizations and other regional non-profits on their community engagement strategies over the past six years.

A music industry veteran and business professional, Dr. Ross spent two decades in New York City working both on stage and behind the scenes in the entertainment industry. She managed label operations for Universal Music Group, the world's leading music company, for over a decade. Dr. Ross is a veteran songwriter, vocalist, and producer who has recorded with renowned artists such as Quincy Jones, Lauryn Hill, Talib Kweli, and Kanye West, to name a few. She has headlined New York's legendary Blue Note Jazz Club more than ten times as a bandleader. In addition, she is a member of the Board of Governors of the Philadelphia chapter of the Recording Academy. Dr. Ross continues to write and record music and advocate for other artists. She has been awarded grants for her solo work and artistic collaborations from The Heinz Endowments, the Pittsburgh Foundation, and the Opportunity Fund.

Dr. Ross is a proud graduate of Pittsburgh Public Schools, K-12, and holds a Bachelor of Music in Music Business and Technology from New York University and master's degrees from Brooklyn College/CUNY and The New School for Social Research. She resides in the Banksville section of Pittsburgh 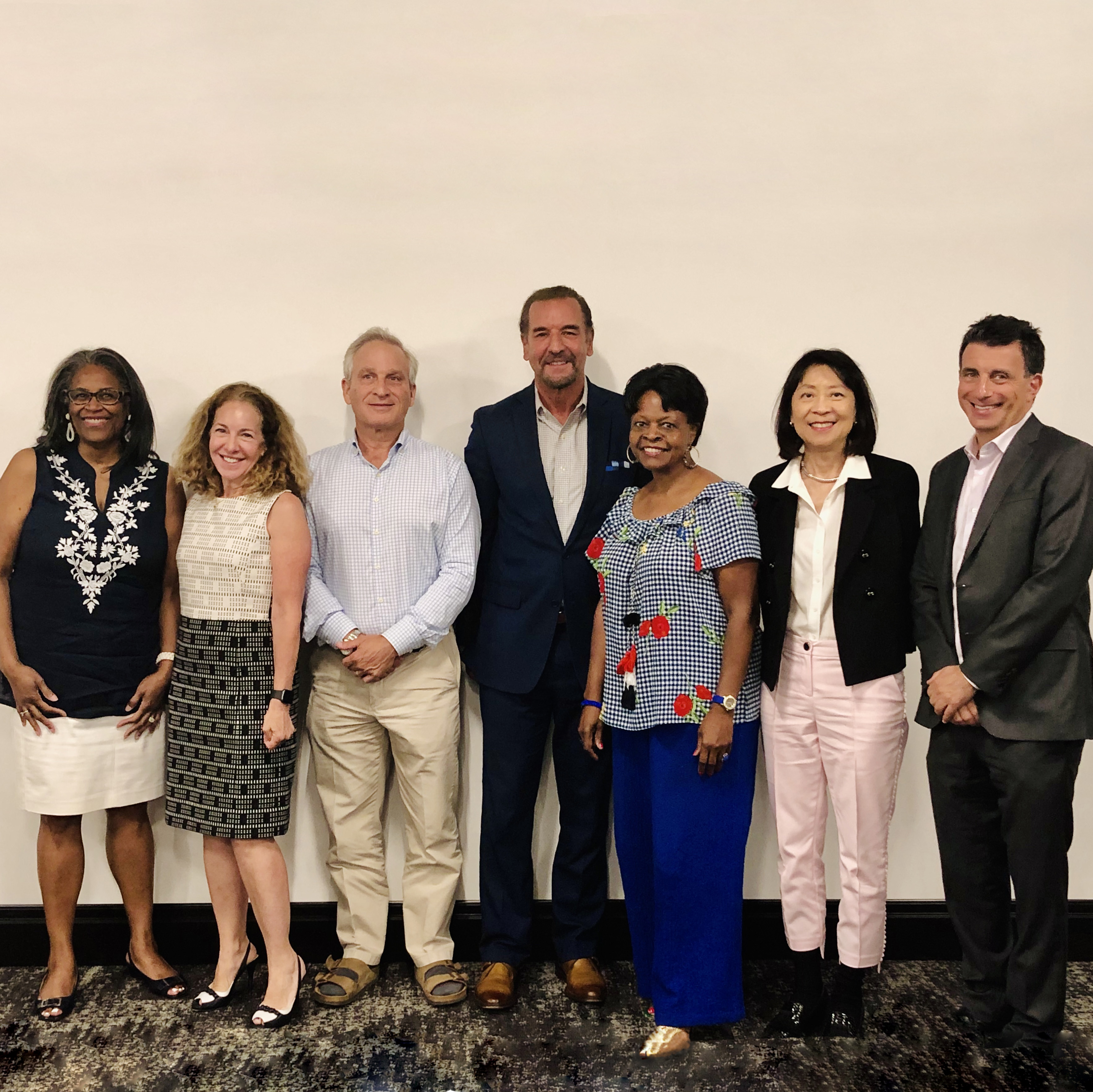 RAD Board of Directors